The Quire also performs shorter programs or selected numbers throughout the year, not only at GLBT community events, but also at events of importance to those who celebrate diversity and respect the civil and human rights of all people. These events include, but are not limited to, Martin Luther King Jr. Day, GLBT Pride Month, Lesbian and Gay History Month, National Coming Out Day, World AIDS Day, International Human Rights Day, and other awareness events, benefits, fund-raisers, holiday observances, faith services and commitment ceremonies.

Performance Attire
Performance attire currently consists of black dress pants or skirt, long sleeved black dress shirt , and black dress shoes and socks which the singer must provide. The Quire tie may be purchased or may be borrowed from the Quire. The intention is to maintain a neat, professional appearance while creating a living, singing “rainbow.” . Members of the Quire should not wear colognes, perfumes or other scents during a performance, since many individuals are sensitive to them and performance situations often require standing and sitting in close formation for long periods of time.

Programming
The director is responsible for programming, but welcomes input from members of The Quire regarding future musical selections. If you have a piece arranged for SATB chorus that you feel would be especially appropriate for The Quire to perform, please provide a copy to the director for consideration. In past concerts, The Quire has performed new, original compositions and arrangements by members of the GLBT communities. The director is always open to reviewing original material.

Attendance
Attendance is extremely important to any group rehearsal situation, and absences can create serious musical and morale problems. It is therefore expected that each member of The Quire will make every effort to be at all rehearsals. Situations may occasionally arise that maker it impossible to be at a particular rehearsal; therefore, each member is allowed to miss up to three rehearsals in any given concert season, (there are two concert seasons per year). Members are expected to notify their section leaders of any absences from rehearsal. Members who miss more than three rehearsals must speak to the director before being allowed to sing in the concert. At the discretion of the director, a vocal audition may be required to assure adequate knowledge of the music.

It is expected that each member of The Quire will bring a pencil with eraser to every rehearsal and will take responsibility for the proper care and treatment of any sheet music distributed until it is returned at the end of the season.

Dues
The Quire asks each member to give one day’s pay each semester as dues for The Quire. The dues are paid in the fall, or in 2 installments at the beginning of each concert rehearsal period, usually September and January. This money goes into the annual operating budget and helps defray the many expenses involved in operating a community chorus. No one will be refused membership because of inability to pay; however, this should be communicated to the Treasurer of the Board of Directors.

Governance and Structure
The Quire is governed by a volunteer Board of Directors, which is elected by the membership at the Annual Meeting. Every attempt is made to keep the board gender balanced. People in the community who are not performing members of The Quire are also invited to serve on the board. Board meetings are open to all members of The Quire, unless the board is in closed session. It is hoped that every member of The Quire will take an active interest in the work of the board and will offer support by serving on standing committees and/or accepting individual assignments as needs arise.

With your support, The Quire can continue to serve our community for years to come!  Click our logo below to donate! 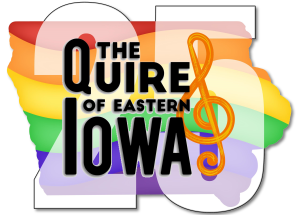 The Quire is a proud member of Iowa Shares, a coalition of social change, environmental, and cultural nonprofits throughout Iowa.